Speakers at the “Future of Long Island CRE” summit pointed to increased migration of manufacturing business from NYC, the growth of transit-oriented residential development and the need for a greater diversity of housing stock, the catalytic impact of downtown redevelopment, more redevelopment of brownfield properties and new property tax assessments in Nassau County.

“There is a vibrant uptick on Long Island. Properties are being developed, redeveloped and reutilized,” said environmental consultant Chuck Merritt, one of the panelists.

“I’m very optimistic about Long Island’s future in general. We are starting to recognize what our problems are,” said another panelist, developer Robert Coughlan.

The summit, attended by 150 and held June 8th at the Holiday Inn in Plainview, was organized by Ron Koenigsberg, president of American Investment Properties Inc.

The summit was Konigsberg’s idea. He said real estate conferences often took place in NYC, but never on Long Island. “Long Island is so different than NYC,” he said.  Earlier this year, he bounced the idea off people he knew and then reached out to NYREJ to help organize the event. “This is really a way to promote our community.”

Koenigsberg said he was pleased with how things turned out. “This was far more of a success than we had hoped for in our first year out,” he said, noting that the audience included a range of industry professionals, bankers, attorneys and others. 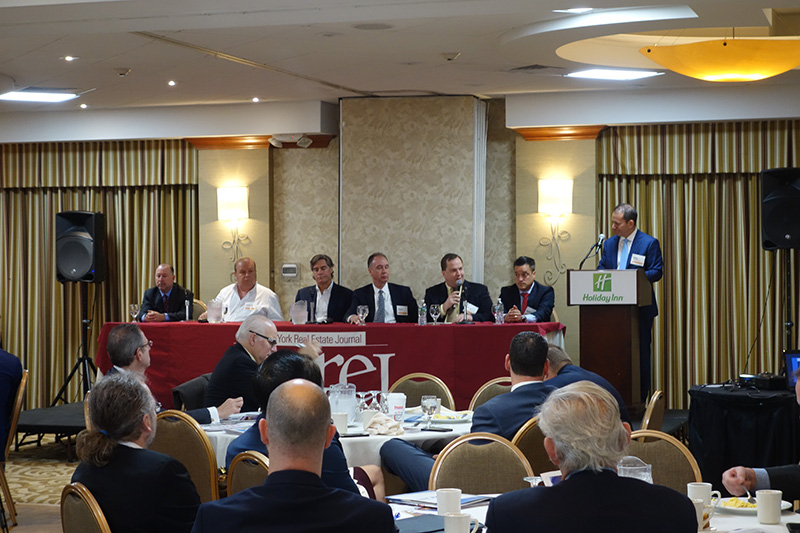 Here are brief summaries of what the panelists said:

Coughlin said multifamily housing on Long Island on a percentage basis relative to single-family homes is half the national average “We should be higher than that,” he said, explaining Tritec’s recent focus on Transit Oriented Development. He said Tritec’s New Village development in Patchogue, 98 percent rented, has been a catalyst for economic development in Patchogue – retail occupancy is now at 95 percent, compared to 45 percent five years ago. This success, he said, suggests that similar development can help revitalize downtowns and raise the values of houses near downtowns. Elected officials “are starting to recognize how we can be transformative in some of these areas,” he said. “We don’t have all the solutions but I think we’re starting to wake up as a community.”

Cronin said that the impact on property tax assessments of sales prices depends on the jurisdiction. He said that “developers from outside Long island get culture shock” when they buy a property in the area for $40 million and find out that it’s assessed for tax purposes at $20 million. They fear that their already high taxes will double. He said big tax rate increases in Nassau County should abate after a reassessment of properties on Jan. 1, 2018 that will impact tax bills in October, 2019. He said Nassau commercial property owners have been paying 10 percent tax of their taxes into the county’s Disputed Assessment Fund, which are refunded if they win a property tax challenge.

He also noted that Nassau is the only New York jurisdiction that pays tax refunds in certiorari cases of monies paid to towns, school districts and other taxing agencies.

Leno said growing transit-oriented development (TOD) along the region’s railroad corridors “is something that Long Island has needed for a number of years.” He said a variety of housing stock and TOD would help curtail the so-called brain drain and help keep young professionals on Long Island. But, he noted, “many municipalities are falling victim to the rallying cry that they don’t want Nassau to become the new Queens and they don’t want it to be an urban setting.” Nevertheless, he said, “We still need a diversity of housing stock. We still need affordable housing where it’s available.” Another concern is the lengthy times it takes developers to get approvals and, thus, obtain financing for their projects. He said municipalities need to develop better programs for getting projects up and running in a timely fashion and that a set of uniform standards should be developed to expedite these approvals. The need for an expedited process in building permits is key for future development on Long Island. He added that municipalities lack sufficient planning staffers to review plans and, as a result, they get bogged down on smaller commercial projects.

Merritt said he prospective property buyers need to learn about potential environmental issues. “In our world of environmental consulting, you start with a Phase 1 [study]. You kick the tires. You go to the property. Talk to people who are familiar with the property and kind of play detective.” He also talks to local building and health departments and uses his firm’s expertise and research to determine environmental concerns. The most-common problems found stem from gasoline and oil products storage. Nevertheless, he noted, many former corner gasoline stations are attracting interest from retailers such as Starbucks and 7-Eleven.  Former dry cleaners are the No. 2 problem with chemicals seeping into the ground beneath their stores. He said it’s hard to get rid of these chemicals and in many cases, the dry cleaners haven’t been on the site for 10 years. Nevertheless, he said, bankers are beginning to finance brownfield properties.

Asaro said Long Island has a very low industrial vacancy rate — 3.1 percent, according to Costar — with demand driven by an exodus of businesses, pushed to move by development, from New York City’s boroughs to Long Island.  Also, he said there is growing demand for warehouse space by e-commerce businesses. Right now, he said, there are about 60 million square feet of industrial space in the region and that the Island’s largest industrial landlord, Rechler Equity Partners, has less than 1 percent available. He said industrial developers are competing for land with residential developers. “Its’ problematic. It’s challenging,” he added.

Mandler said solar power “is basically a numbers game.” Property owners can figure on a 5-year payback on a solar installation, aided by a 50 percent government subsidy. “With a 50 percent subsidy, you can hardly go wrong. He said Long Island on average receives about 4.5 hours of sunlight daily on an annual basis.